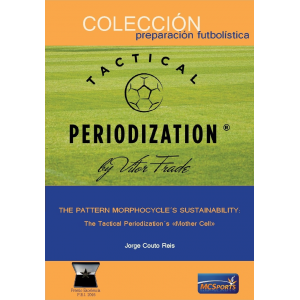 «This document was produced under the guidance of Professor Vítpr Frade,the creator of the Methodology to be studied. Professor Frade contributed immensely to the content of this document throughout its development in order to fulfill the purpose of this work, which is an in-depth approach to the Methodology created and developed, and thus contribute to its clarification through careful research. Monographic works carried out under Professor Frade›s guidance were considered as fundamental bibliographic sources, in addition to an extensive bibliography composed of books of different fields and scientific articles from very diverse sources, including some of the most prestigious scientific journals worldwide.»

In this book, the author offers a possibility to delve deeper into the Science of Football Training, providing the fundamental pillars to understand precisely what Tactical Periodization is, through its fractal representation: The Pattern Morphocycle.

Jorge Couto Reis, UEFA-Pro coach, Technical Director at FC Barcelona, and student of Prof. Vítor Frade at the University of Porto (FADE-UP), developed this excellent work over several years of research, within the scope of the Master’s Degree held at INEFC Barcelona. In addition to the guidance of Prof. Vítor Frade, he was also supervised by Prof. Francisco Seirul.lo Vargas, and collaborated directly, through interviews, with scientific eminences from areas such as the Physiology of Perception and Action, Integrative Physiology, Morphogenetics, and Theory of Dynamic Systems. He also referenced coaches in the implementation of this Methodology, including Xavi Hernández, one of the maximum exponents of this game.